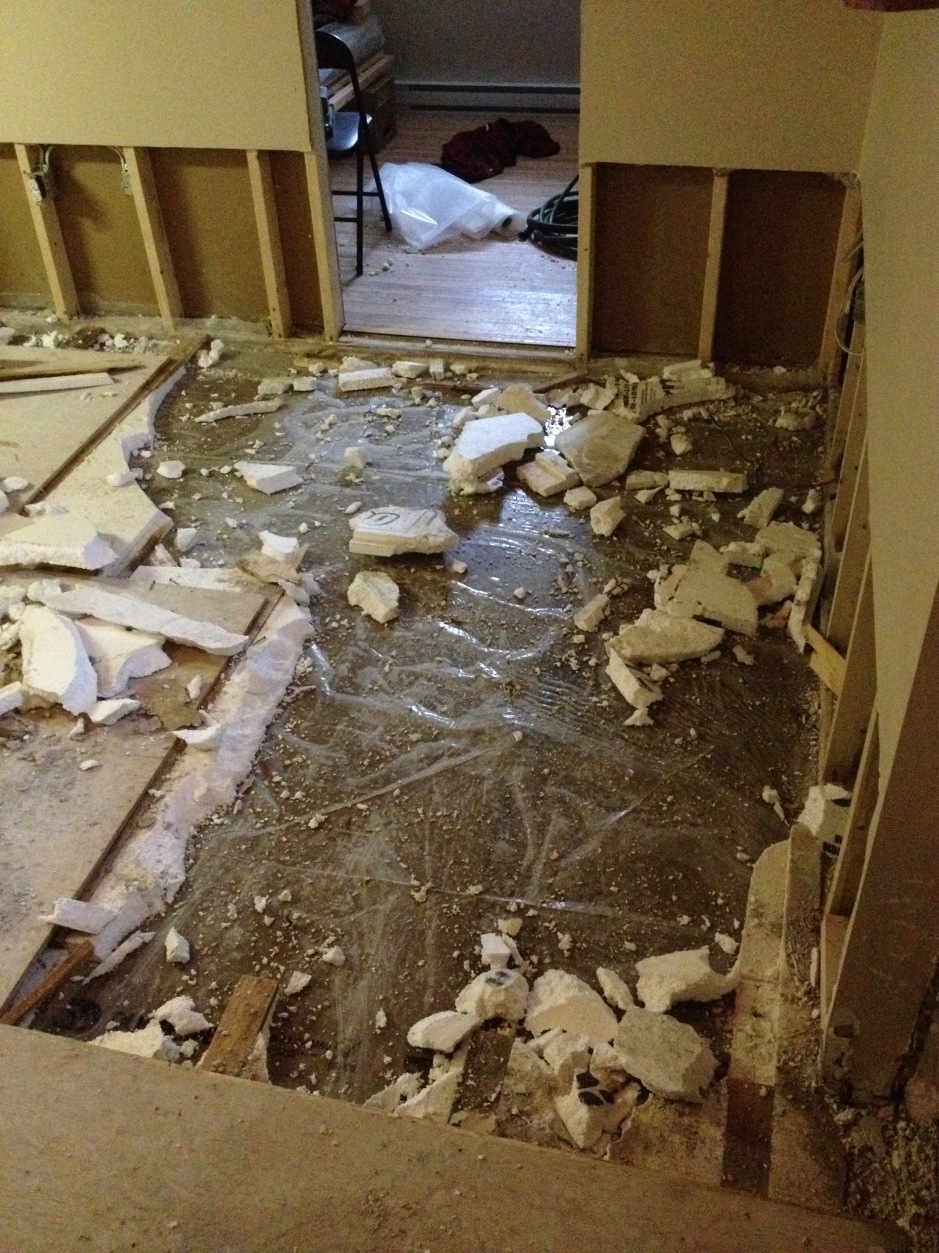 (Read Part 1 of How To Unfinish A Basement here.)

The lower portion of the walls had soaked up a lot of water. Mold and mildew were definitely present, so we had to remove some of the (no longer) dry wall. At each corner, we measured two feet up from the sub floor, using a chalk line to mark the height. Kate cut along each chalk line using a utility knife, and then we were able to punch the lower portion of each wall out, mostly using the hammer and our feet. We had shut off the power to the outlets before starting, for safety, and Dad had removed the baseboard heaters. Behind the external walls, we encountered sodden, nasty-looking insulation (think gray instead of pink) so we pulled it out (with gloves on), bagged it up, and added it to the trash heap.

The sub floor (plywood panels directly under the laminate) did NOT smell good. The wood was soaked through and steeped in mildew, so it became necessary to keep the door and windows open as we worked. The large sub floor panels were screwed into wooden joists. I attempted to unscrew them using the drill, with mixed results. The damp wood was swollen in some spots, and there were more than a few screws that refused to budge. I unscrewed the ones I could and left it at that. Strictly speaking, it wasn’t necessary to unscrew everything as long as you were brawny enough to wrench the panels out of the joists. I was ok at this, though not as good as Kate, or Dad. The trick was to shove a large crow bar as far underneath a panel as you could, and then use the power of physics (in the form of a lever) to pry the boards up. That process took a long time, but it was super satisfying.

Under the plywood, we found a series of waterlogged wooden joists with thick pieces of styrofoam tucked between them. The joists were wet enough that they were rotting away from the concrete nails that held them in place; the wood broke apart as we yanked it up. The styrofoam panels were wedged together pretty tightly, but it was easy enough to smash them into smaller pieces and pull them out. Once that was done, we cut away the wet plastic sheeting underneath, and then we were finally face to face with the concrete.

The concrete nails that had held everything in place were thick and firmly embedded. Row by row, they protruded defiantly from the floor, creating a pretty serious tripping hazard. Since it was impossible to pull them out of the concrete, we had to shear the tops off so they would be flush with the floor. Using Dad’s grinder, we did just that. (Well, Kate did. I was too intimidated by the sparks.)

Our basement is about 500 square feet, which isn’t huge. However, when we stacked up all the laminate, wood, styrofoam, and drywall, it made for quite a pile. We carted several truckloads away to the nearby dump. We kept some of the plywood as Kate had plans to use it outdoors in the landscaping process, but the rest was too wet and rotten to be any good to us.

We are in no rush to refinish the basement. For one thing, we don’t have the funds to do it. For another, it doesn’t make sense to slap new flooring and drywall down in a room that’s still drying. We want to be completely sure that there is absolutely no moisture left to speak of. Keeping the concrete exposed for a few more months is the prudent thing to do.

Besides, it’s not like we’re wanting for reno work to do. The upstairs comes with its own problems to address, lessons to learn, and skills to master.

One thought on “How To Unfinish A Basement (Part 2)”